The three steps are described in detail below.

Log in to the official website of the Weixin Official Accounts Platform, go to Development > Basic Settings and check the agreement to become a developer, and click the Modify Configuration button to enter the server address (URL), Token, and EncodingAESKey. The URL is the URL of an API used by the developer to receive Weixin messages and events. The Token can be randomly entered by the developer to generate a signature (this token is compared with the token contained in the API URL to verify security). The EncodingAESKey is manually entered by the developer or randomly generated and used as the encryption/decryption key for the message body. 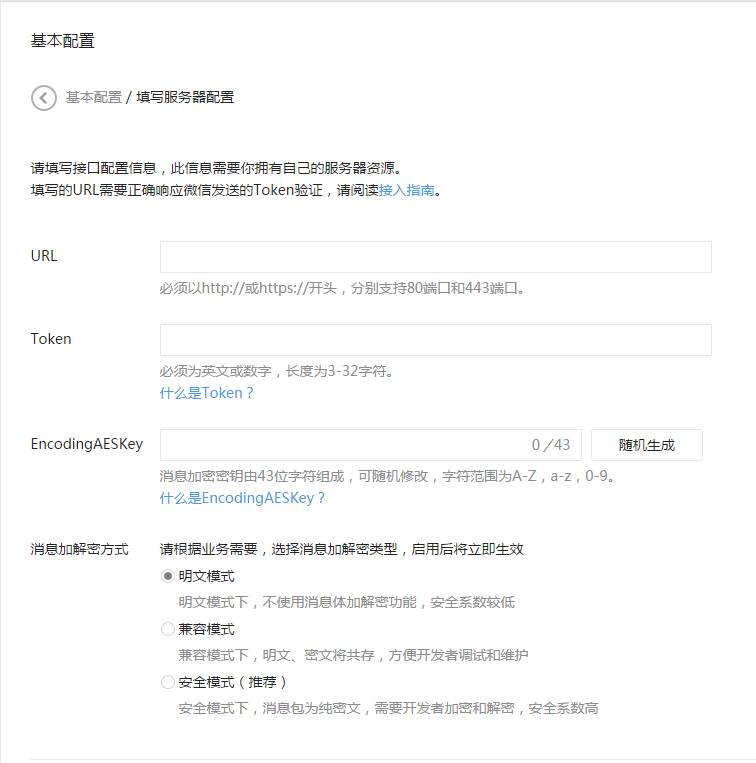 # Step 2: Verify That the Message Comes from the Weixin Server

After the developer submits the information, the Weixin server sends a GET request to the entered server URL. The parameters carried by the GET request are as follows:

Developers verify the request by verifying the signature (see the verification method below). If you confirm that the GET request comes from the Weixin server, return the echostr parameter as is, so that the access takes effect and you enter the developer mode; otherwise, the access failed. The encryption/verification procedure is as follows:

(1) Sort the token, timestamp, and nonce parameters in lexicographic order. (2) Join the strings of the three parameters into one string and encrypt it via SHA1. (3) Compare the encrypted string with the signature. If they match, the request comes from Weixin.

# Step 3: Implement the Business Logic as per the API Documentation

If the URL is validated, the access takes effect and you enter the developer mode. You can apply for Weixin Verification on the Official Accounts Platform to obtain more API permissions and thus meet more business needs.

Generally when the Official Account calls an API, the result for a successful request is returned. For the specific result, see the description of relevant API. When an error is returned, the error cause can be queried based on the error code. See Common Error Codes.

Note that the Weixin Official Account APIs must begin with http:// or https:// and support ports 80 and 443 respectively.