(1) Broadcast Message: Official Accounts can send broadcast messages to users at a certain frequency (1 time per day by Subscription Accounts, and 4 times per month by Service Accounts), including text messages, articles, images, videos, and voices.

(2) Passive Reply Message: When a user sends a message to an Official Account, the Weixin server forwards the message to the server address set by the developer in the Developer Center (the developer should verify message authenticity), and the Official Account replies to the message within 5 seconds by either sending a message or a command of no reply to the Weixin server. Passive reply messages can be encrypted by setting in Official Accounts Platform > Developer Center, and then will be handled according to the message encryption/decryption documentation. Other types of messages are returned by API not request, so encryption/decryption is not required.

For many complex business scenarios, services are provided via webpages, and the following information is required:

(1) Getting the user's basic information via webpage authorization: The developer shall acquire the consent of the user before collecting their basic information using this API (OpenID can be obtained without user's consent).

(2) Weixin JS-SDK: It is a toolkit for developers to use native Weixin features through JavaScript code on webpages. Developers can use it to record and play Weixin voice, listen to sharing events on Weixin, upload images from mobile album, take photos, and implement other capabilities on webpages.

We take the following Service Accounts as examples: 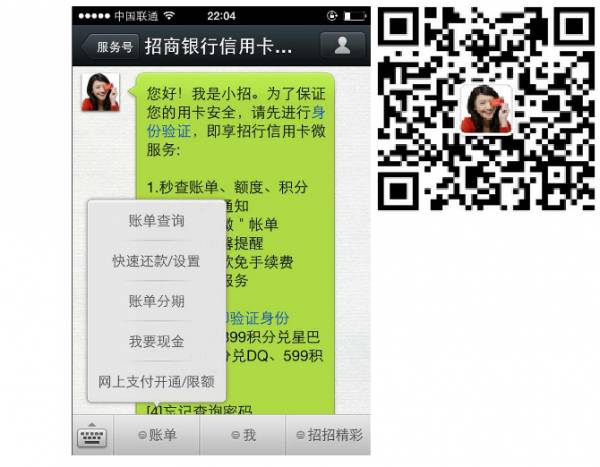 As a card holder, you can quickly query credit card bills, credit limit and points; quickly make repayments, and apply for paying bills by installments; connect to Customer Service via Weixin; make purchases using credit card, and receive transaction notifications via Weixin. You can also apply for a credit card via Weixin if you don't have one. 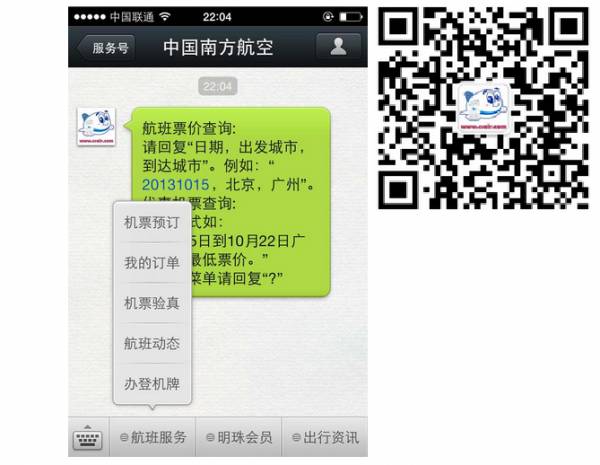 You can check in, choose a seat, query flight information, and check the weather in the destination city, and will receive professional services if you are a SkyPearl Club member.

The China Southern Airlines Official Account allows users to link their SkyPearl Club member cards with their Weixin IDs so that they can book flights, check orders, and even check in via the Official Account. 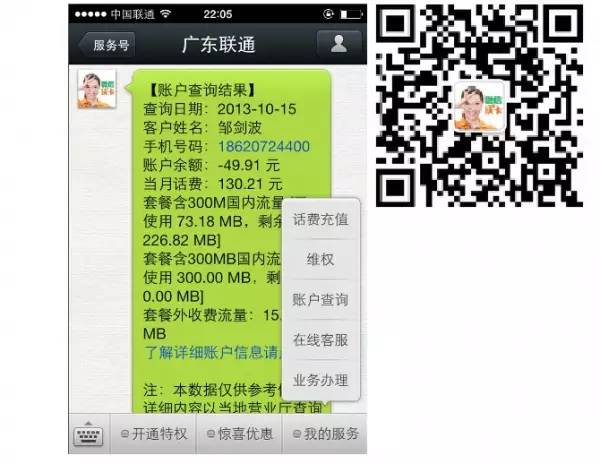 You can link your mobile number in Weixin to query your points, package balance, mobile data, and Weixin-specific data, and contact Customer Service.

The Guangdong Unicom Official Account allows users to link their mobile numbers to their Weixin IDs to query data usage and package balance. Users who purchase a "Weixin WO Card" can also get five exclusive privileges in Weixin.