# Respond to Events with WXS

Frequent user interactions can cause stutters of a Mini Program. For example, A and B are two elements on the page. When the user makes a touchmove gesture on A, B is required to follow A to move. movable-view is a typical example. The response process for a touchmove event is as follows.

a. A touchmove event is thrown from the view layer (Webview) to the logical layer (App Service);

b. The touchmove event is handled at the logic layer (App Service), and then the position of B is changed through setData.

A response to touchmove involves two rounds of communication between the logic layer and rendering layer, as well as a rendering. The time-consumed communication and setData rendering that blocks the execution of other scripts cause delays of the interactive animations. 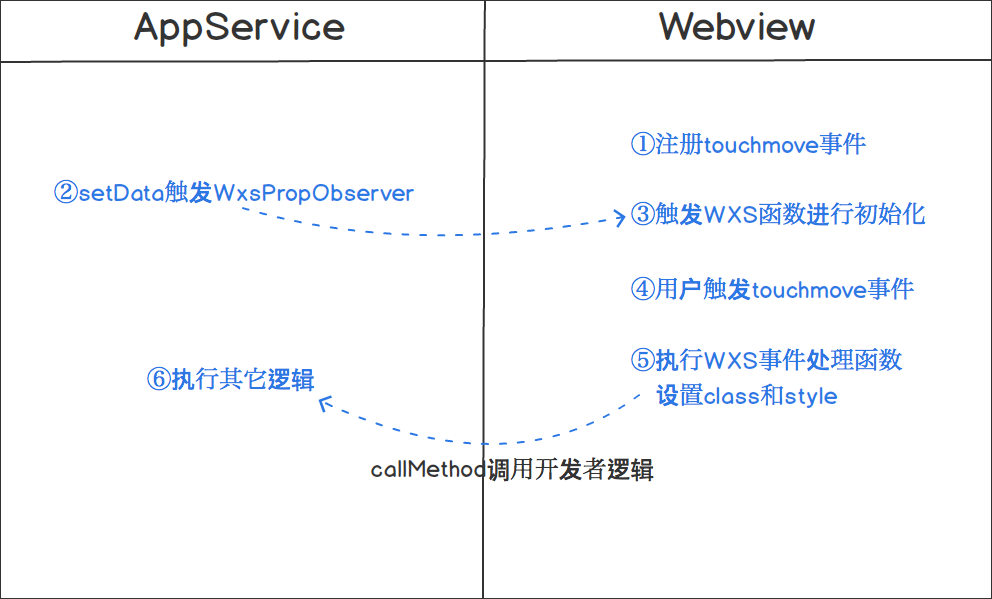 WXS function can only be used to respond to the events of built-in components of a Mini Program and does not support custom component events. In addition to purely logic operations, WXS function can also access and set the class and style of a component through the encapsulated ComponentDescriptor instance. Setting style and class is sufficient for interactive animations. The following is an example of WXS function:

The definition of ComponentDescriptor is as follows:

The change:prop above (a property prefixed by change:) triggers the WXS function when the prop value is set, and its value must be enclosed with {{}}. Similar to the "observer" in Component-defined properties, setData({propValue: newValue}) will trigger the WXS function once being called.

Note: The WXS function must be enclosed with {{}} and is triggered once the prop value is set, rather than just when the value is changed. Therefore, the WxsPropObserver function is called when the page is initialized.